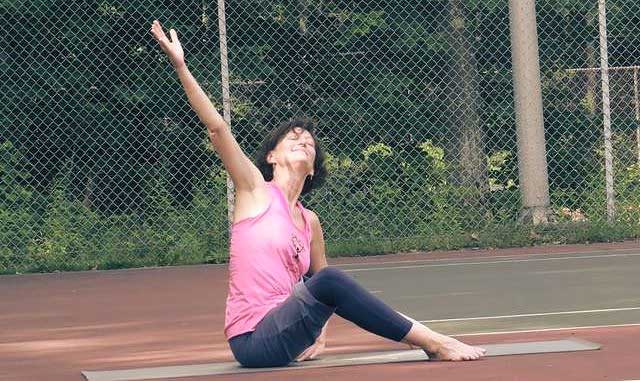 Yoga in the park draws crowd in Mountain Top

WRIGHT TWP. — Midway through a pose Catherine Schaeffer looked up to the clouds, welcoming a ray of sunlight that beamed from the otherwise overcast sky.

Schaeffer, an instructor at Mountain Yoga and a Wilkes University educator, responded to the light by telling roughly 25 class attendees to welcome it as well.

The beautiful morning continued for the remainder of the free class inside Wright Township Municipal Park, held by Mountain Yoga.

Vibrant greenery and calming sounds of nature made a perfect setting for her land-to-water yoga, a somatic-based type that focuses on a combination of classic yoga and movement education.

“That’s different than what most of us normally do,” she said of the yoga type. “I wanted to bring something different, especially because that’s a form that relates a lot to natural imagery.”

Instructors of the studio rotate heading the event, focusing each on their own favorite form of the exercise. Schaffer has spent half of her 20 years practicing yoga focusing on the somatic style, believing in its therapeutic properties.

Leading the group through several poses varying in difficulty, Schaeffer often compared poses to that of ocean animals, such as swimming like a dolphin or moving like a seahorse with a “liquid spine.”

Making her way through the movements with ease, Mountain Top resident Angela Li opted for a more challenging position with “eye of the needle” pose.

“I love it, it’s beautiful here,” she said of attending the class.

Moving toward the end of the class, Schaffer began to guide the group through a series of cool-down moves, walking around and rendering aid to anyone needing help.

“I’ve been doing yoga for years at Mountain Yoga. This is just the most pleasant part, being outside,” she said. “It was hard for me to relax at first, but teaching myself to release and calm down (with) breathing was important.”

Schaeffer added that anyone can attend and complete the free sessions — regardless of skill level.

“The goal of somatic yoga is the ease and efficiency of movement,” she said. “Over time, you gain strength, you gain flexibility, you gain balance, you gain overall health.”

The free Mountain Yoga In the Park series continues each Saturday until Aug. 31.