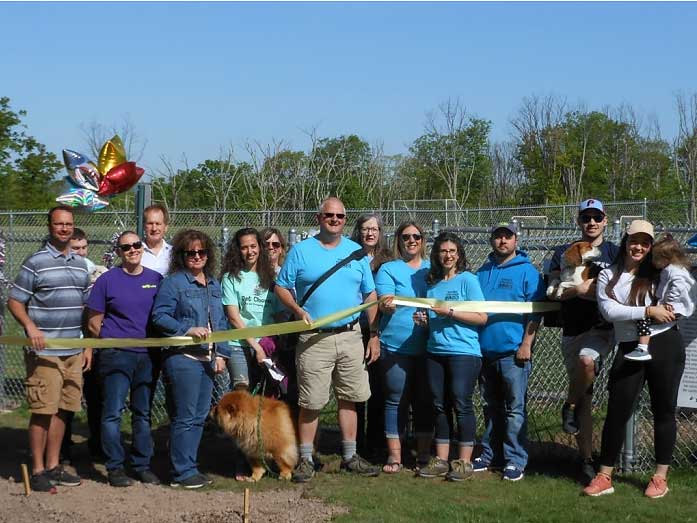 Mountain Top dog owners who have searched for a place where their pets can socialize and run free don’t have to look any more — the Wright Twp. dog park is officially open.

Township officials along with members of the recreation board and community supporters participated in the grand opening and ribbon-cutting ceremony Saturday morning at the dog park located at the township’s municipal park.

The park was first proposed to township supervisors in March 2017 by recreation board chairwoman Laurel Prohaska. Supervisors gave her approval to solicit funds on behalf of the recreation board and to build the dog park within the municipal park if they raised enough money. While the park is located on township grounds, it was constructed entirely through private donations, fundraisers and a grant from Luzerne County’s Marcellus Shale funds.

Though she was confident the park would come to fruition, Prohaska admitted she was surprised the funds would be raised so quickly.

“Because of the number of people who walk their dogs in the park, I felt confident we could raise the money,” Prohaska said. “We are really pleased that we raised the money in the amount of time. I thought it would take longer.”

Township supervisor Matthew Howton, the board’s liaison to the recreation board, had no doubt the project would be successful.

“We have such a pro-active volunteer recreation board, that actively participates in a number of programs, I had no doubt that this would be successful,” Howton said. “I’m very happy that they took the initiative and they raised the money they did.”

By the end of 2018, less than 18 months after the recreation board received permission to move forward with the project, the committee raised $15,960. The money came from individual donations, fundraisers and a $4,223 grant from Luzerne County.

The board raised another $5,608 in March from a designer-purse bingo, the second such event. That fundraiser brought the total amount raised to more than $21,500. The project also received donations from proceeds of sales from Sweet Lush Cupcake Camper, Abe’s Hot Dogs in Mountain Top, and the Women’s Clothing Consignment Shop.

Prohaska said she, along with recreation board members Tom Mayka and Amanda Smith, were responsible for much of the fundraising efforts.

Township employees are putting the finishing touches on a pedestrian bridge into the dog park located on the south side of the municipal building. The park consists of a fenced in area with a double-gate system. It includes separate enclosed areas for dogs less than 30 pounds and another for dogs more than 30 pounds. The next phase will consist of installation of signs, benches and trees.